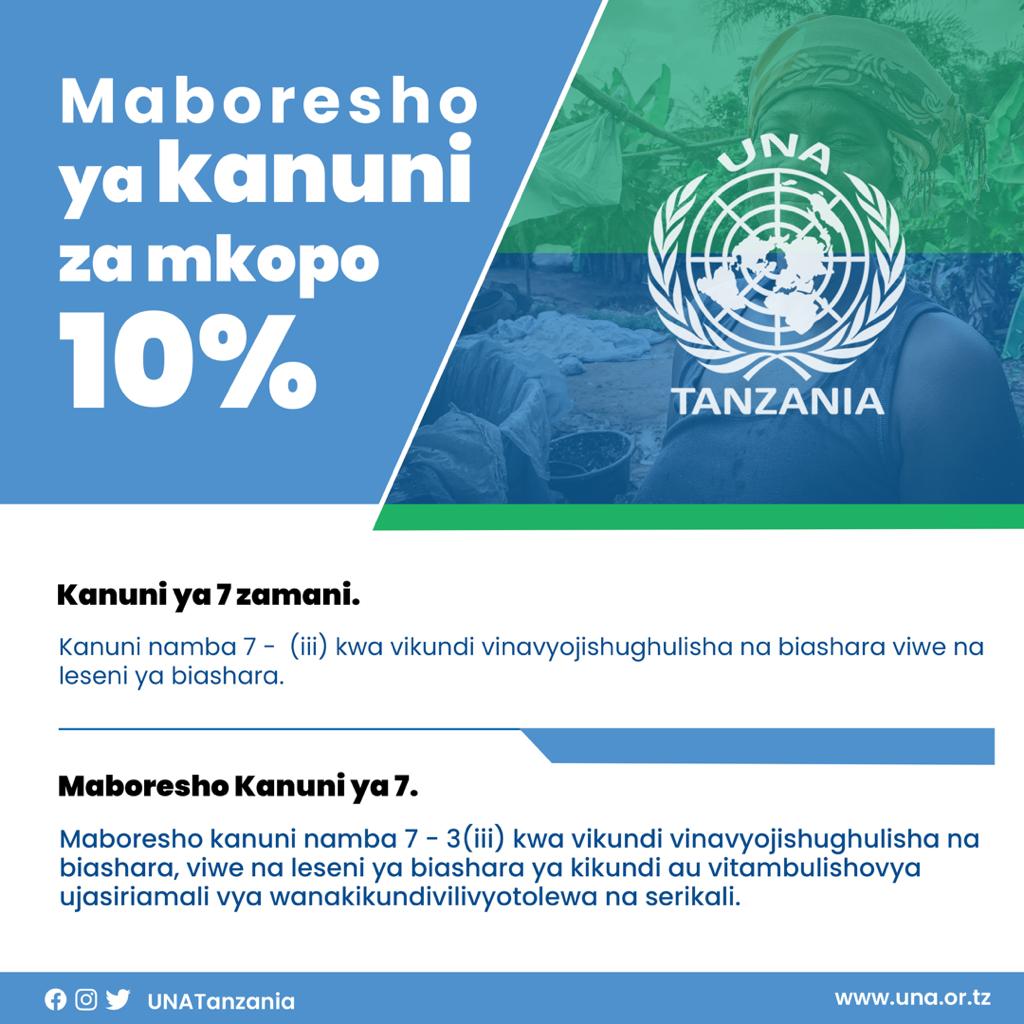 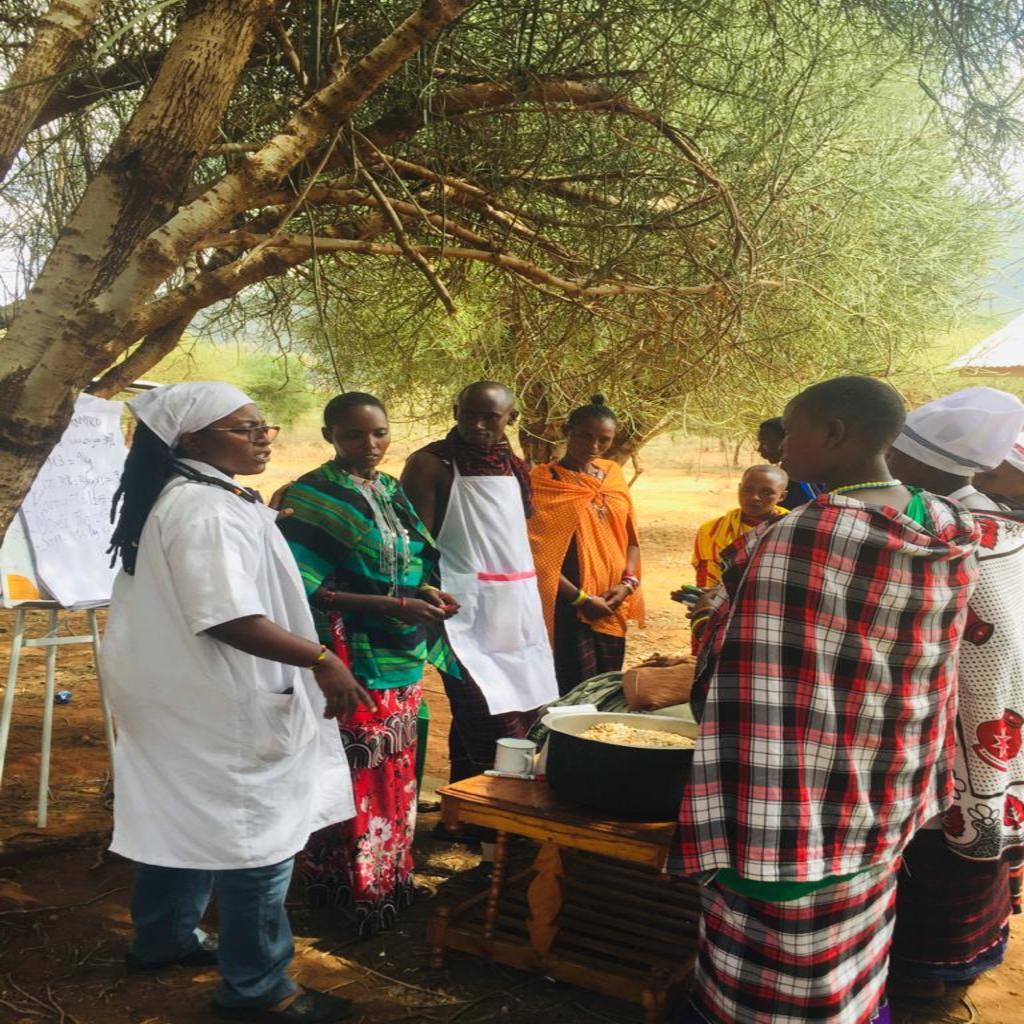 In effort to collect challenges and success stories to ensure the 10% Empowerment loans from Local Councils for Women, Youth and People with Disabilities are more effective, UNA Tanzania, earlier this year, conducted a follow up visit with 8 youth organizations working to empower and engage young people in decision making and livelihood programs. During this visit we assessed the impact of 10% loan as a result of UNA Tanzania national advocacy work for effective governance of the loans at Local Councils in some groups in 6 regions in Tanzania. One of the tremendous efforts done in organizations was a group of Maasai women who purchased food processing equipment through the loans from the Longido Local Council. This organization is part of 21 Youth Organization in our Youth Livelihood Empowerment program.

Some of promising impact of 10% on Young people are notable as 150 youths in groups used the loans to purchase income generating tools such as sewing, milling machines and motorcycles. The tools facilitate them to run business on food processing small industries, livestock fattening, small-packaging busines, and retail business. Likewise, in Korogwe Tanga youth groups engage in fish farming. All these activities earn young people a leaving and add up to their household income.

Moreover, UNA Tanzania champions for effective management of the loans for Sustainable and meaningful impacting youth including young mother’s livelihoods. 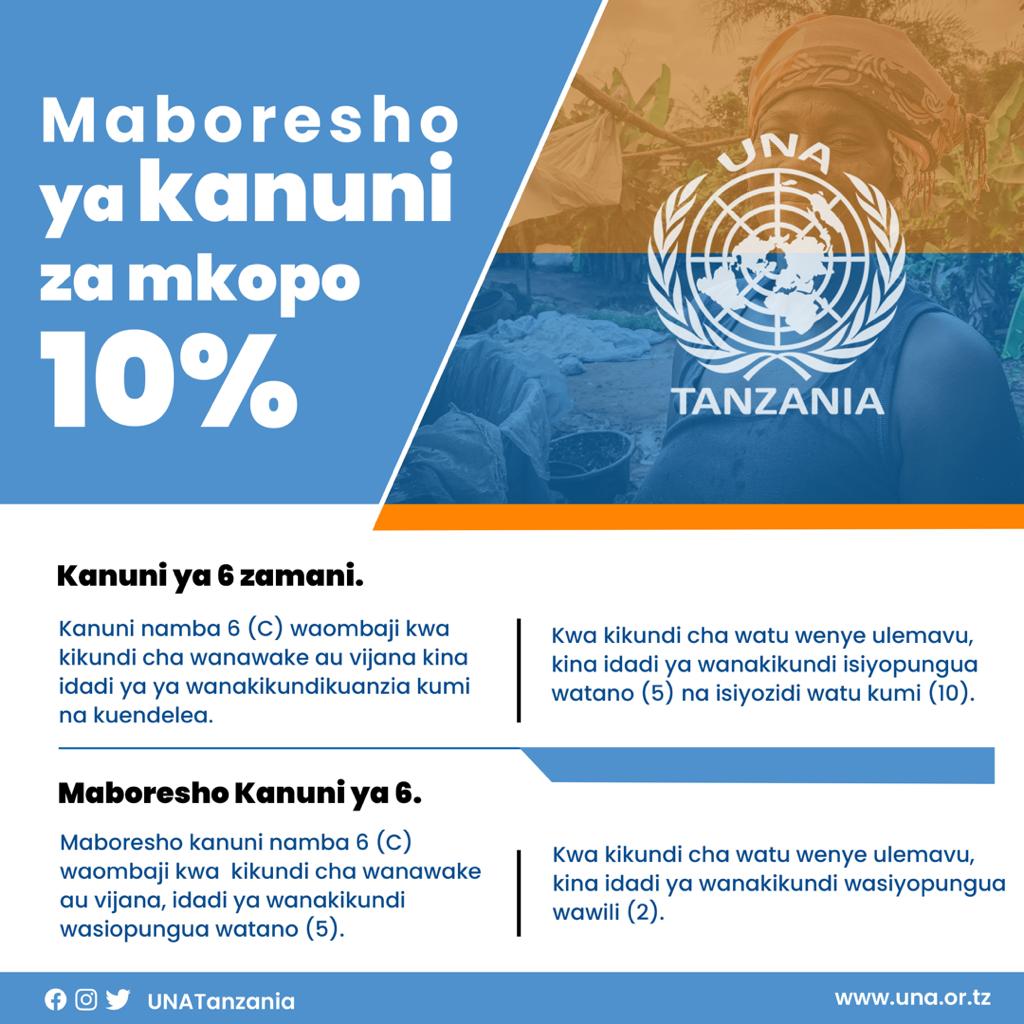 In the past 3 years United Nations Association of Tanzania has been engaging in advocacy work at national policy level to ensure effective administration of the 10%  Empowerment Loans for Women, Youth and People with Disabilities groups at Local Government Authorities in Tanzania, with special interest in the youth 4% that goes to youth, but all the 10 % cuts across different groups of youth because women can access the other 4% and young people with disabilities  can access the 2% allocated for people with disabilities. We have worked with the parliamentary youth groups, TAMISEMI, CSOs and the department of youth in the prime minister’s office.

In 2018, UNA Tanzania conducted a survey of 17 districts documenting success stories, challenges and recommendations from beneficiaries, LGAs and stakeholders (CSOs) working with young people in the 17 districts. The survey revealed that there was lack of universality in the administration of the 10% within the districts, different standards and interpretations of the law.Thus, the need to have the guidelines that will interpret the laws and regulations for smoother governance of the funds.

Using the findings, UNA Tanzania conducted several engagements with TAMISEMI which led to a joint recommendation that UNA Tanzania lead the exercise to produce the guidelines for the administration of the 10% district funds.

As advocates for the effective implementation of the empowerment fund, this is an important UNA Tanzania has accepted TAMISEMI’s proposition to collaborate in order to speed up the process of creating the guidelines. The guidelines will;

On our last meeting, TAMISEMI in partnership with UNA Tanzania and Policy Forum invited different stakeholders and Community Development Officers to go through the first draft of the guidelines that were development last November. This gave in new minds and light to making the guidelines more effective not only for the beneficiaries but also for the Community Development Officers who are in charge to issue and follow up on the loans. 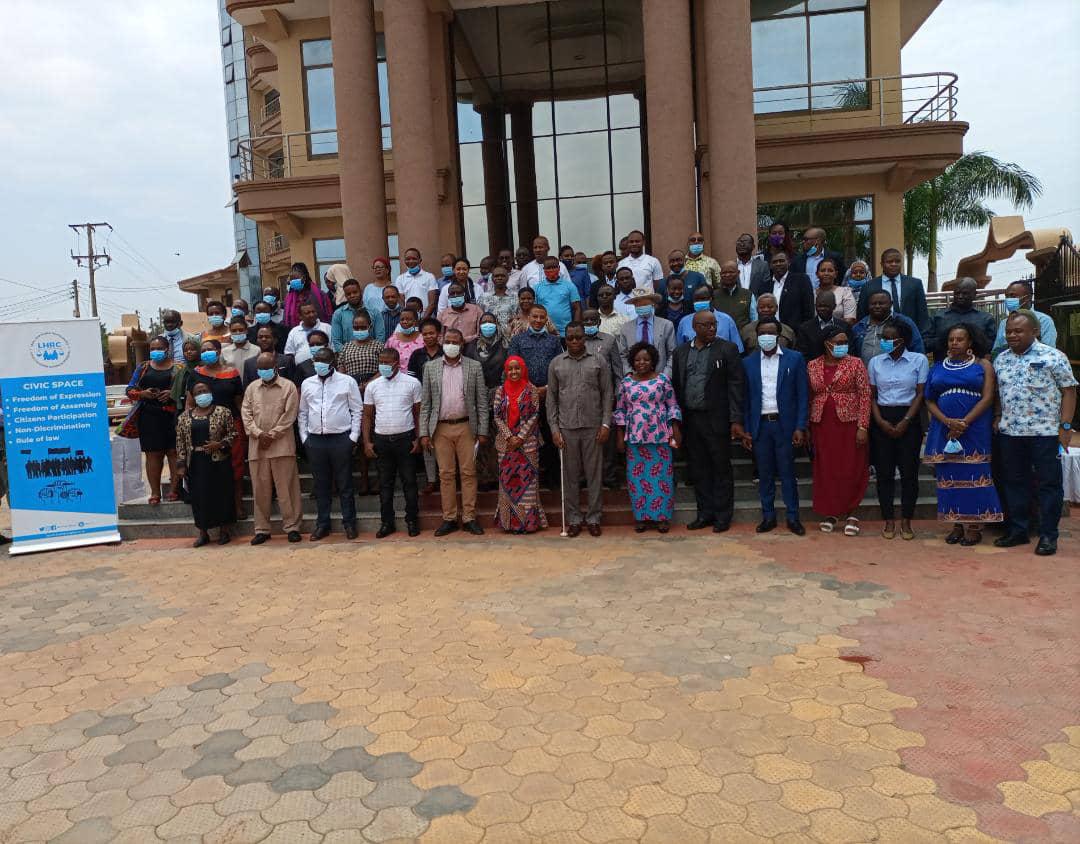 As we are heading towards the 2021 Universal Periodic review, Non-Governmental Organizations, the government and other human rights stakeholders in Tanzania are currently in the preparations for the third review of our country, to which UNA Tanzania is participating in an ongoing process of formulating the national CSOs Universal Periodic Review (UPR) 2021 report. We shared our contributions in regard with our engagements on youth economic rights and the progress of SDGs implementation in Tanzania from 2016.

The Universal Periodic Review (UPR) is the world’s mechanism that provides a comprehensive review of countries’ human rights records and their adherence to international standards. The process was established in 2006 by the United Nations’ Human Rights Council (HRC), with an ultimate aim of improving the human rights situation in all countries and address human rights violations wherever they occur.

According to the schedule issued by the UN Office of the High Commissioner for Human Rights, Tanzania will be reviewed in October 2021. This being the current position, NGOs and the Government are currently required to develop reports that will be submitted for the actual review in Geneva in 2021. 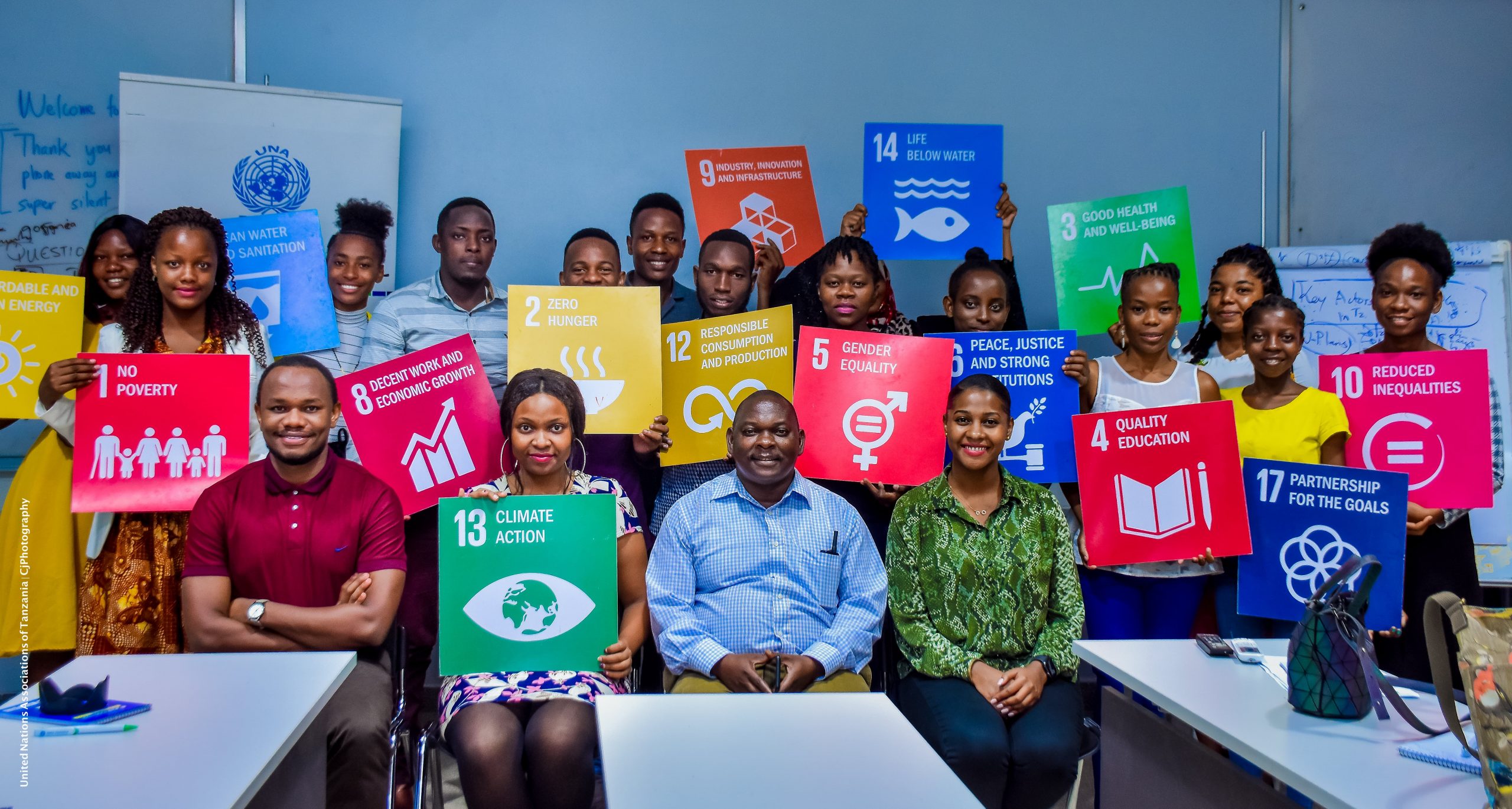 The SDG’s journalist and storytelling club was formed as a result of previous engagements with journalists in reporting SDGS stories. Our SDGs4ALL project supports the capacity building and initiation of the club. As we are in the “Decade of Action” our focus is on accelerating actions toward achieving SDGs by engaging media on how to communicate, achieve and meet challenges in the implementation of Agenda 2030. In 2021, we conducted a training with a theme; “Journalism and Media in Acceleration of the Decade of Action”

The main objective of the training was to strengthen journalists’ capacity in conveying stories that represent voices that are likely to be left behind.

The SDGs Journalist and Storytelling club is a youthful group aged 18-30 with the potential of achieving the SDGs in Tanzania. Further, the group is comprised of three Journalism categories such as general, specialized and investigatory journalism.

Signup to our newsletter to get our latest update

The Sustainable Development Goals: 17 Goals to Transform Our World