Climate change has been recognized as a global pandemic caused by both natural causes and humans activities which are increasingly influencing the pandemic through burning fossil fuels, cutting down forests and farming livestock among other causes. One of the effects is sea level rise which causes saltwater intrusion into fertile lands and human settlements resulting in a threat to food security among other effects. 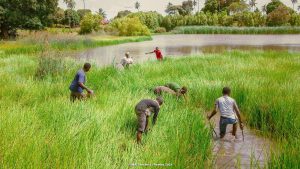 This has been evidently seen in Kengeja, Pemba Island where UNA Tanzania has been working with the community since 2016 in dealing with salt water intrusion which is largely contributed by human activities such as sand extraction and cutting down trees (mangrove trees). Salt water intrusion has caused several challenges to Kengeja communities such as reduction of agricultural production, flooding, family evacuation, famine, low income and difficulties in keeping livestock.

Since then, several efforts have been put into place to ensure Kengeja people are involved in climate actions. One of the vivid examples is planting of 10,000 mangrove trees at “Mfuuni valley,” “Ukunda valley” and “Mchangani valley” places which are largely affected by saltwater intrusion. UNA Tanzania mobilized community members with different economic status, social difference, age and sex in the process of planting the mangrove trees. The mangrove trees plantation involved more than two thousand (2000) people from five (5) villages that to us counts as a collective community action to implement the Sustainable Development Goals.

UNA Tanzania has been focusing on mechanisms for raising capacity for effective climate change-related planning and management in Kengeja including focusing on women, youth and local and marginalized communities. For example, revamping environmental school clubs is one of the efforts done by UNA Tanzania with the objective of educating future generations about the importance of environmental protection and how they might face bigger challenges than the current generation if further steps won’t be taken. These clubs were formed from 10 primary schools with over 500 hundred members.

As a mechanism to integrate climate change measures during the process of local planning, Local Government Authorities (LGAs) position is inevitable. UNA Tanzania revived 4 Local LGAs environmental committees with each having 12 members (48 in total). The committees closely manage different areas against environmental perpetrators who mostly cut trees for economic purposes without planting new ones.

In order to successfully reduce salt water intrusion, community members should keep planting mangrove trees and raising awareness amongst themselves about environmental protection, however it has to be known that everyone needs to be involved in the process including Private sector, Community Based Organisations, Civil Society Organizations, Media and the Government.

Below is a picture showing how salt water has affected communities’ farms where nothing can grow: 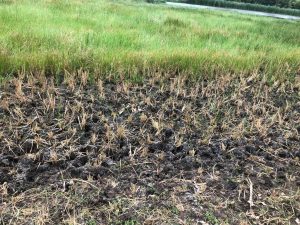 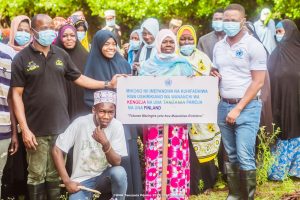 A family photo with the community members and UNA Tanzania.